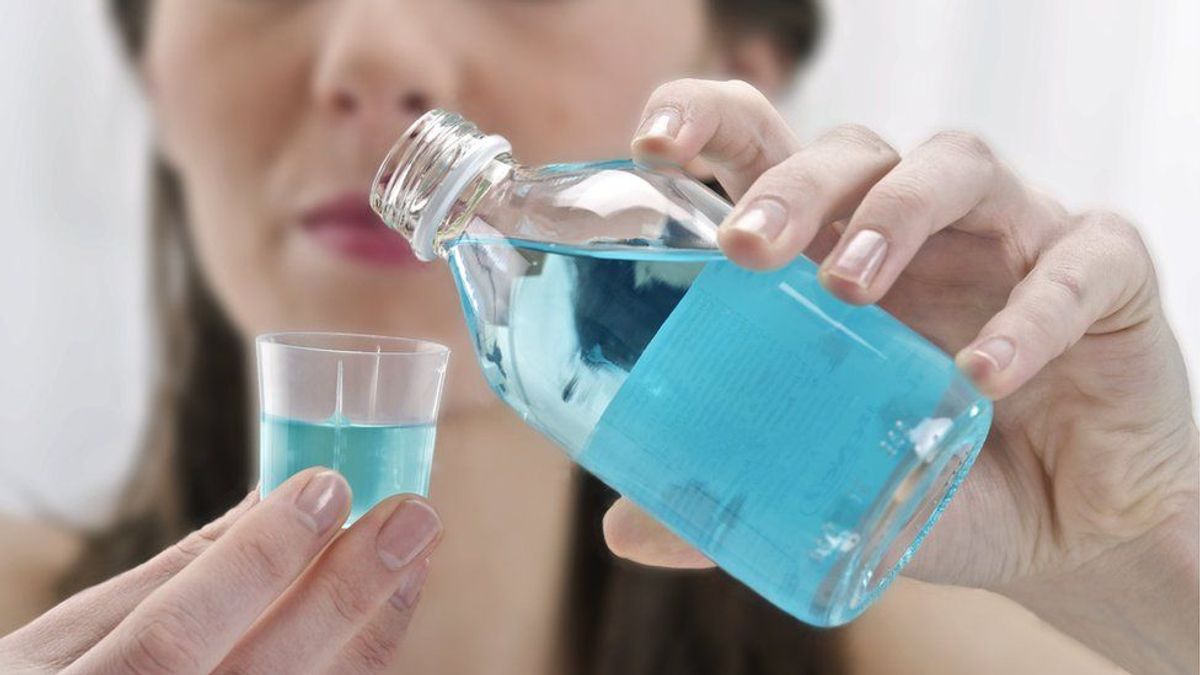 What is a mouthwash?

A mouthwash, or an oral rinse, is a liquid product used by swishing around one’s mouth and between teeth. Rinsing the teeth, gums and mouth with mouthwash will help to displace food residue or particles and freshen one’s breath. Although mouthwash does not replace daily tooth brushing and flossing, utilizing mouthwash correctly will improve one’s oral hygiene and strengthen one’s teeth. It is also important to note that not all mouthwashes available in the market are the same! Different product formulas contain different active ingredients, and therefore perform differently.

How do I use mouthwash correctly?

Q: When is the best time to use mouthwash?

It doesn't matter whether you use a mouthwash before or after you brush and floss. However, it is recommended that you do not immediately rinse with mouthwash after brushing and vice versa. This is because the beneficial fluoride from the toothpaste deposited on your teeth could be washed away by the mouthwash. On the other hand, certain ingredients in the toothpaste might reduce the antimicrobial effect of the mouthwash, It is also advisable not to eat or drink for 30 minutes after using a mouthwash.

Q: How much mouthwash do I use?

Always follow the instructions provided on the label or packaging of the mouthwash. The cap of the product will usually be marked.

Q: Should I dilute the solution?

Again, be sure to read the label or the packaging on the mouthwash of your choice. Some brands require you to do so and the others do not. Do note though, that if the label does not recommend diluting the solution, then you may not get the full benefit of the mouthwash if the active ingredients are at a lower concentration.

Q: How long should I swish for?

30 to 60 seconds (depending on manufacturer’s instructions). Rinsing for less than 30 seconds would reduce its effectiveness but swishing for over 60 seconds may also be an overkill, potentially causing your gums and tongue to burn. Further, do not swallow the solution, always spit it out.

Q: How often should I use mouthwash?

Most mouthwash brands recommend using it twice a day. Though, keep in mind that using mouthwash is not and should not be a replacement for your daily brushing and flossing.

But… is it really effective?

Can one expect sparkly clean teeth and healthy gums just by swishing once or twice a day? The answer is sadly no. There are four key aspects to good oral health:

The second and fourth aspects are self-explanatory. In relation to the first aspect, swishing with mouthwash exposes our oral cavity with fluoride, thereby aid in the remineralization of our teeth and help prevent tooth decay. In addition, mouthwash also contributes to plaque control, both mechanically and chemically. Mechanically, the action of swishing the liquid forcefully around the mouth and between the teeth through muscular action of the cheeks, lips and tongue dislodges particles and debris and disperses therapeutic agents. Chemically, the active ingredients in the mouthwash aids in the control of diseases such as tooth decay, periodontal (gum) disease and dry mouth.

Notwithstanding, mouthwash is not the perfect solution to plaque control. It lacks the capability to remove stubborn food residue and plaque buildup. Therefore, we need regular teeth brushing and flossing to physically remove both food residue and plaque buildup from our teeth. When our teeth are free from debris and particles, mouthwash can get to all areas in our mouth, including those that are inaccessible to mechanical cleansing methods such as regular toothbrushing.

In short, mouthwash is not the all-in-one solution to perfect teeth and gum health, but it is clinically proven to be a very effective bacteriostatic and bactericidal agent.

What mouthwash should I get?

There are broadly speaking 2 categories of mouthwashes: cosmetic and therapeutic. Cosmetic mouthwashes are useful in temporarily freshening one’s breath, but they do not contain any chemical or biological application. Therapeutic mouthwashes contain active ingredients such as antiplaque agent and antibacterial agent, which are aimed at preventing tooth decay or diseases.

Of the various types of active ingredients, chlorhexidine has been long recognized as the “gold standard mouthwash”. This can be attributed to a couple of reasons. Firstly, chlorhexidine is highly safe, in that it has minimal risk for carcinogenesis, has low absorption from the digestive tract and does not cause long-term chemical changes to the bodily functions. Secondly, chlorhexidine is an antimicrobial agent which is capable of acting against a vast variety of bacteria. It is also thought to have antiplaque properties. Thirdly, chlorhexidine has superior substantivity. Substantivity is an important feature of chlorhexidine. It refers to the ability of chlorhexidine to adhere to teeth and oral cavity surfaces and then release gradually over time. This allows chlorhexidine to portray high level of effectiveness over an extended period of time (up to 12 hours).

For these reasons, chlorhexidine remains to be widely accepted as the “safest documented chemical antiplaque agent with a high efficacy”. That said, chlorhexidine is not without its drawbacks. The primary long-term side-effect of chlorhexidine is causing brown staining, which may lead to aesthetic problems.  This may be effectively countered by prophylaxis at 6-month intervals.

By the way, if you are looking for the perfect mouthwash, why not give it a go with our Ice Blue line of mouthwash? It is proven to enhance the healing of mouth ulcers, bleeding gums, sore throats, tonsillitis, post-surgical and extraction wounds faster, more effectively and comfortably. 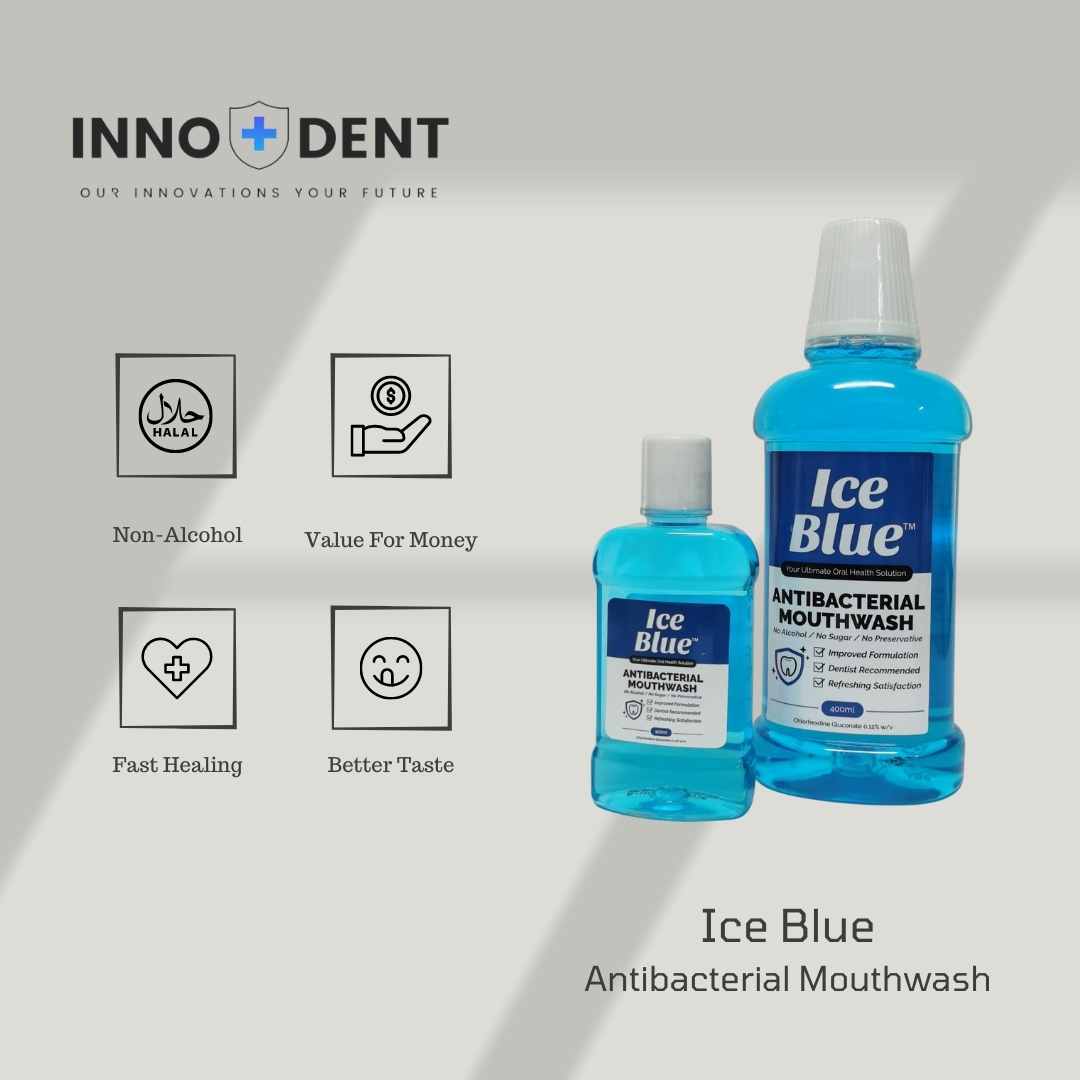 Water Flosser (Waterpik) vs String Floss: Which is better?
Jan 13, 22

Mouthwash Before or After Brushing? When is the Best time to use it and Everything You Need to Know About Mouthwash
Jan 07, 22

5 Reasons Why You Need to Use Mouth Wash to Complement your Brushing and Flossing routine
Aug 23, 21